Although the question may sound simple, the answer is usually dependant on several factors.  We don’t think there is ever a bad time to visit Tanzania as every season or month has its highs and lows.  We will try and lay them out here for you and sum up what you should expect at each time of the year.

The weather in the Serengeti

SERENGETI WEATHER
As Tanzania is situated between the Equator and the Tropic of Capricorn, there is very little variance in the temperature range throughout the year. With an average temperature of around 30°C during the day, however at night it can drop to around 15°C. The main variation to the impact of the temperature is both the humidity and the annual rain fall.

The best time to visit Tanzania is before the main rains in the country arrive around the beginning of April and generally run through until the end of June, but there can always be that exception to the rule.  The second rainy period, but not so prevalent and strong as the first rainy period, runs from around the beginning of November (a few weeks later in Zanzibar) to the middle of December. (In our general tour information we always recommend to bring a rain jacket and a warm beanie type hat).

The weather in the Serengeti, as all other parks, does vary throughout the year, which is due mainly to the humidity in Tanzania.  The driest and hottest period in the country starts in mid-June and runs through to the end of October.  This is the “dry period” and is a reliable time to head out to Tanzania and the Serengeti as well the other game parks as it offers great game viewing along with a climate that suits most (See the Game Parks chart above for the best times to visit Tanzania game parks). From November until the main rains in April, the humidity starts to climb in the country with the most humid period in January and February. 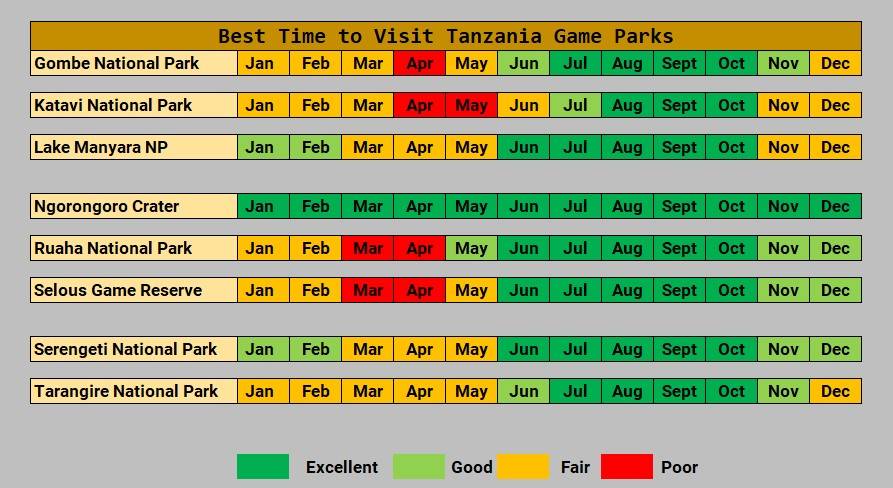 June to October (All parks), June-July and January-February (Serengeti for the wildebeest migration and calving)

June to October (Little to no rainfall)

The best time to visit Serengeti

During the dry season, animals congregate near water sources, placing predators and their prey in close proximity, which makes for some exciting game viewing and offers the best wildlife viewing in general along with perfect photo opportunities –  the wildebeest migration is the absolute top highlight.  The timing of the migration varies every year (the best chance of seeing it is during June and July) while the wildebeest calving and large predator action are from late January to February.

The world-renowned Ngorongoro National Park dry season from around June – October each year is one of the best times to visit this stunning game park in Tanzania. Temperatures are a lot cooler and very little chance of rain.   The lack of rain means that the vegetation is sparse and animals, such as the shy and elusive black rhino, are a lot easier to find. There is one downside though to this incredible game viewing experience in one of Africa’s most prolific game reserves and that is the crowds of tourists at that time of the year.

The wet season which is November through till around May is considerably less crowded but it is still a great time to view and photograph animals.  Generally, the “wet season” consists of afternoon showers with the heaviest of the rains falling in March, April and May.  During this wet season, we see the return of many migratory bird species, creating a stunning burst of colour in the bush. Game during this season tends to be more spread out due to the fact there is an abundance of water and vegetation, this makes spotting game a little more difficult. However, this should not deter the wildlife enthusiast, as even during the wet season, there are few places on earth that can compete with Ngorongoro’s game viewing.

The best time to climb Kilimanjaro

Although it’s possible to climb Mount Kilimanjaro all year round, your timing is a major factor in your chances of making a successful summit. With two optimum climbing periods, both of which coincide with the dry season months of June to October and January to February.  At other times of the year, the seasonal rains can make the summit routes slippery and challenging to navigate. January and February are generally warmer than the winter months of June to October (although differences in temperature are minimal this close to the equator). 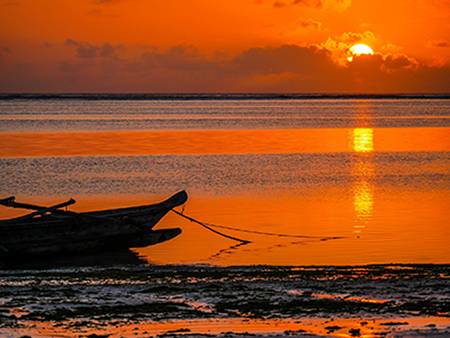 Whatever time of year you decide to climb, make sure to bring cold weather gear, as the top of the mountain is perennially crowned with ice.  These rules also apply to Mount Meru, which is located in the same area as Kilimanjaro.

The best time to visit Zanzibar the coast and islands

The best time to visit Tanzania, Zanzibar and the coast for a beach break, in fact, heading to any of Tanzania’s beautiful Indian Ocean islands, is during either of the dry seasons. The best time to visit Zanzibar is from June to October during the cool, dry months of spring. Another popular time to visit this tropical island is from December to February when it’s hot and dry.

The March to May rain is unusually very heavy on the coast, making this period of the year unreliable for those beachgoers and sun worshippers. The storms also disrupt underwater visibility, which can be disappointing for scuba divers and snorkelers alike.

Tony Sparkes
Photographer & Guide at Tony Sparkes Wildlife & Photographic Safaris
Tony Sparkes is a professional wildlife & nature photographer in South Africa. Being a qualified field guide he also leads photo and wildlife safaris in South & Southern Africa.
Latest posts by Tony Sparkes (see all)
By Tony Sparkes|2019-09-05T09:46:45+02:00April 19th, 2019|Categories: Safaris, Travel|Comments Off on Best time to visit Tanzania
Page load link
We use cookies on this site to optimise your online user experience. Some of the cookies we use are essential for the site to work. By continuing to use this site you accept our use of cookies. Learn more about Cookies I Agree
Go to Top