Skip to content
Animals in Brazil The Iconic ‘Big Five’

Brazil is considered the most biodiverse country in the world, occupying over 50% of South America’s land mass.  Many of you are familiar with the Amazon Rain Forest, the largest rain forest in the world.  Brazil itself accounts for 60% of this unspoilt tropical haven. Did you know that Brazil also has the world’s largest tropical wetland, the Pantanal? Stretching across the Brazilain states of Mato Grosso and Mato Grosso do Sul as well as spilling over into Bolivia and Paraguay.  Together these two astonishing ecosystems harbour an astonishing abundance and diversity of Brazilian animals.

With such a wealth of animals, it is only to be expected that Brazil has some of the worlds most iconic of animals. From fish with fearsome teeth, insect-eating giants, monkeys that howl and an elusive swimming big cat.

Like the wildlife safaris of Southern Africa, where one can experience Africa’s Big 5, did you also know Brazil has its own ‘Big Five’? Here is a list of the top 5 most iconic Brazilian animals, that you may encounter on your Pantanal tours or Amazon Rainforest adventures.

Brazilian Animals a Must See 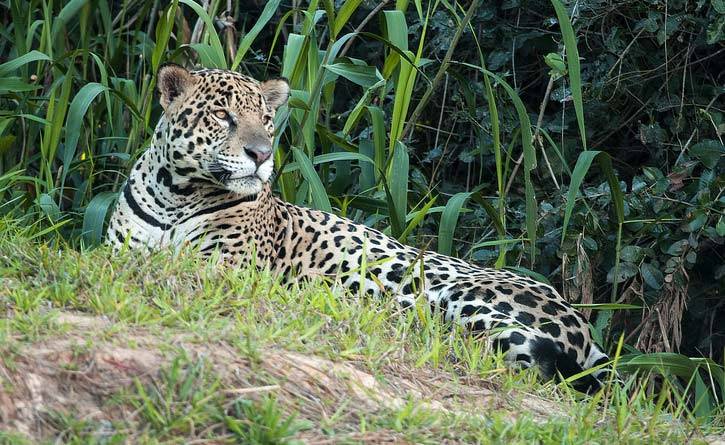 Although these magnificent animals can be found in the Amazon Rainforest, the best place to see this Brazilian animal is the ‘Pantanal’.  Jaguars (Panthera onca) are secretive animals and hide easily in the dense rainforest.  Unlike the Amazon, the ‘Pantanal’ is an open type landscape that presents the perfect arena for spotting some of the most iconic Brazilian animals.

Your best chance of finding and photographing this elusive animal when travelling on any of the tours, is via the network of rivers and ox-bow lakes, upstream from the fishing community of Porto Jofre (250 km from Cuiaba).  Cruise along the river by boat either early in the morning or from dusk when they hunt, eat and drink.  Solitary and elusive, Jaguars are the largest wild cats in the Americas and the 3rd largest big cats in the world (after tigers and lions).  They have the most powerful bite amongst the big cats and can crush the skull of a fully-grown caiman.  Unfortunately, they are listed as “Near Threatened” on the International Union for Conservation of Nature (IUCN) Red List of Threatened Species. 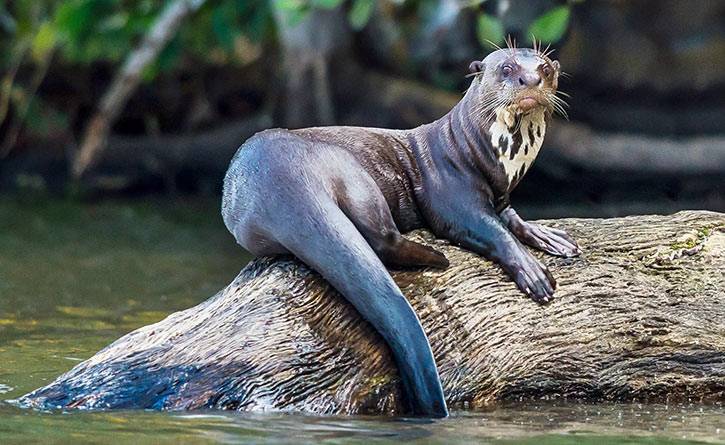 The Giant River Otter (Pteronura brasiliensis) is a carnivorous mammal.  This Amazonian giant reaches up to 1.7 metres (5.6 ft) in length.  Known through much of its range as the ‘river wolf’, the giant otter is one of South America’s top carnivores.  It is the largest of the otter species with otter cubs being born totally covered with fur; indeed, the species is one of the only carnivores with a fur-covered nose.

Sadly, giant otters are also one of the most endangered animals in Brazil.  Up until the 1970s, they were hunted for their valuable fur, and at present they are threatened by habitat loss and pollution.  Their habitat is being destroyed by mining, logging and damming of rivers.  As a result of this habitat loss, the giant otter is listed as “Endangered” on the IUCN Red List of Threatened Species.

If you do manage to find them in the wild, giant otters are one of the most entertaining Brazilian animals to watch.  They are diurnal (active during the day) and noisy when playing (which they do a lot), so listen out for them.  Also, look out for their cleared burrow areas on the riverbanks.  They live in social groups, comprising of a breeding pair and their offspring, and they rest, play, fish and sleep together.  They seem to exist in the constant state of motion of catching and eating fish.

The best place to see this Brazilian animal in the wild is the Brazilian ‘Pantanal’, on the banks of the slow-moving Cuiaba River, around Porto Jofre. 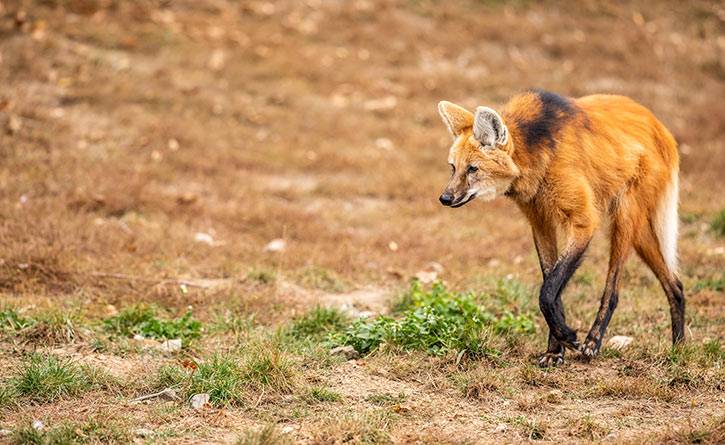 The elusive Maned Wolf (Chrysocyon brachyurus) is the largest of the canids in South America.  Its markings resemble those of foxes, but it is neither a fox nor a wolf.  Nicknamed a “fox on stilts,” it is perhaps best known for its once-heard-never-forgotten “roar-bark.”  When threatened, the thick mane hairs stand erect, making the animal appear larger.  To enhance the bluff, an anxious Maned Wolf will stand upright, lower its head, and threateningly arch its back.  Unlike other large canids the ‘Maned Wolf’ does not form packs, it hunts alone, usually between sundown and midnight.

Maned wolves rotate their large ears to listen for prey animals in the grass.  They tap the ground with a front foot to flush out the prey and pounce to catch it. The Maned Wolf is omnivorous, however, it specialises in preying on small and medium-sized animals, including small mammals.

Unfortunately, like many of the animals of Brazil, the future of these wonderful, stilt-legged canids is very much in doubt.  With only around 17,000 mature adults left in the wild, and mostly found in Brazil where their numbers have decreased by 25% over the last 15-20 years.  Widely suspected of being mass killers of chickens, the Maned Wolf has long been hunted down and killed by chicken farmers throughout South America.  Additionally, Maned Wolves are susceptible to diseases spread by domestic dogs, many of whom act aggressively towards their distant cousins.  However, the biggest threat to the animal is habitat loss.  It is then not surprising that the Maned Wolf is listed as “Near Threatened ” on the IUCN Red List of Threatened Species.

The best place to see this Brazilian animal in its preferred habitat is the Brazilian ‘Cerrado’  which is open grasslands or pampas as it is known in South America. The ‘Cerrado’ covers 20% of Brazil and is the largest savanna region in South America. Try and head up to the Chapada dos Veadeiros National Park which is a world heritage site.  The Brazilian ‘Cerrado’ is located between the Amazon Rainforest and the Pantanal, particularly in the states of Goiás, Mato Grosso do Sul, Mato Grosso, Tocantins and Minas Gerais. 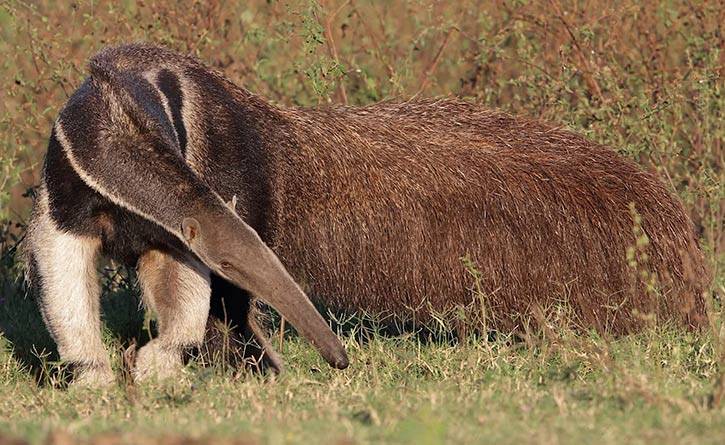 One of the oddest looking animals of Brazil you may encounter on any Brazilain photo safari or tour is the Giant Anteater (Myrmecophaga tridactyla), also known as the Antbear.  One of four Antbear species, the others being the Silky Anteater considerably smaller at just 45cm long (18in) and the Southern and Northern Tamandua or lesser Antbears with the latter the only one not found in Brazil.

Being mostly solitary animals, the Giant Anteater is a huge specialised insect-eating (Termites) mammal some 1.8m (5ft 11in) in length. Visiting up to 200 termite nests in a day to ensure it consumes the thousands of insects it needs to satisfy its intake requirements.  Giant anteaters have poor sight but an excellent sense of smell, which they depend on for foraging, feeding, and defence.

Giant Anteaters are equipped with sharp bear-like claws and elongated snouts equipped with a thin tongue that can be extended to a length greater than the length of the head. Their tube-shaped mouths have lips but no teeth and their tongue is covered with thousands of tiny hooks.  Giant Anteaters have adopted a feeding strategy of licking up large numbers of ants and termites as quickly as possible.  The tongue is attached to the sternum and moves very quickly, flicking 150 times per minute and can consume 35,000 insects a day.  The anteaters stomach, similar to a birds gizzard, has hardened folds and uses strong contractions to grind the insects.

But despite all these adaptations, giant anteaters only take a small number of insects from each nest before moving to the next one, to avoid over-exploiting the food sources within their home-ranges.  Threatened by habitat destruction, the giant anteater is listed as “Vulnerable” on the IUCN Red List of Threatened Species.  The experts estimate that there are approximately 5,000 individuals left in the wild.

The best place to see this Brazilian animal in its preferred habitat in the wild is the Southern ‘Pantanal’ in Brazil. The open savanna is their preferred habitat type and the abundance of termite mounds guarantees a renewable food supply for them. 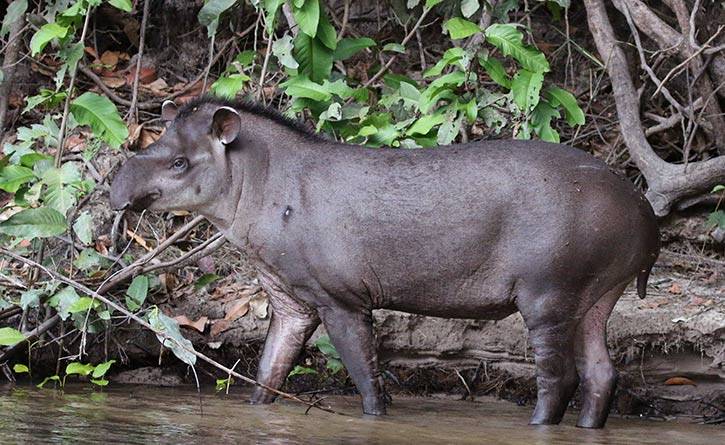 Like the Giant Anteater the Tapir (Tapirus terrestris) or the South American Tapir also commonly called the Brazilian Tapir is one of the strangest looking Brazilan animals living today.  The Tapir is a large, herbivorous mammal, similar in shape to a pig, with a short prehensile nose trunk.  Tapirs are quite large animals (South America’s largest land mammal) weighing in at about 360kg’s (800lbs) and they stand about 1m (42inches) tall.

Their feet are equipped with three large toes that help them walk through soggy terrain, which is commonly known as odd-toed ungulates, like the Rhinoceros of South Africa. The Tapir’s prehensile (gripping) trunk is made to wrap around and grab things. Tapirs use their noses/trunks to grab fruit, leaves and other food. For food that seems out of reach the Tapir can stretch its nose way up, wrap around the morsel and pull it down to eat.

Also being excellent swimmers, a Tapir’s trunk can be used as a snorkel, assisting and making it easier to swim. Often called the “gardeners of the forest,” Tapirs play an important role in the dispersing of seeds.  Tapirs require a large range for foraging, and when they eat fruit and berries in one area and travel to forage in the next, they take those seeds with them in their digestive tract and disperse them as they defecate.  This helps boost the genetic diversity of plants in the forest.

Interestingly often predated on by Jaguars,  Tapirs will run into the water (not always successfully) to escape from these predators as they are exceptional swimmers. Tapirs will often only defecate in the water to avoid their scent being detected and thus avoid predators.

Female Tapirs have a gestation period of around 13 months and reproduce every couple of years. Baby Tapirs are born covered in black, yellow and white stripes and spots, which serves as camouflage against predation during the vulnerable first few months of their lives.  The Brazilian tapir is threatened by poaching and habitat destruction and as a result it is listed as “Vulnerable” on the IUCN Red List of Threatened Species.

The best place to see this Brazilian animal in its preferred habitat in the wild is the ‘Pantanal’ particularly Pouso Alegre eco-lodge, where you can often watch them emerge out of the forest at sundown and wade into a watering hole for a long unhurried drink.

Brazil’s major biomes, the ‘Amazon Rain Forest’, ‘Pantanal’ and the ‘Cerrado’ undoubtedly provide such biodiversity with their own individual flora and fauna, it is impossible to choose an iconic 5 animals. This list is my personal choice and it is difficult to really provide a ‘single’ definitive top-five iconic list of the animals of Brazil, in my view.

In further blog posts, I will provide additional information on other animals that are as ‘iconic’ like those above and that go to help make up Brazils extraordinary wealth of animals.

Tony Sparkes is a wildlife photographer and wildlife guide in South and Southern Africa.  We provide guided photo safaris and wildlife tours throughout Southern Africa and other worldwide destinations. We assure all our clients of our commitment to the highest level of safety and etiquette when touring with us.

Tony Sparkes
Photographer & Guide at Tony Sparkes Wildlife & Photographic Safaris
Tony Sparkes is a professional wildlife & nature photographer in South Africa. Being a qualified field guide he also leads photo and wildlife safaris in South & Southern Africa.
Latest posts by Tony Sparkes (see all)
By Tony Sparkes|2019-09-05T09:36:30+02:00June 14th, 2019|Categories: Travel, Safaris|Comments Off on Animals in Brazil The Iconic ‘Big Five’
Page load link
We use cookies on this site to optimise your online user experience. Some of the cookies we use are essential for the site to work. By continuing to use this site you accept our use of cookies. Learn more about Cookies I Agree
Go to Top