These are the big (and not so big) hitters, the long hauliers, those that migrate thousands of kilometres on an epic journey often fraught with death and danger.

The Most Famous Migrant

The most famous of our Afro Palearctic Migrants to make that long haul each year back and forth to their breeding grounds  and the ‘most famous’ for its migratory patterns are the Arctic Tern (Sterna paradisaea) which has a circumpolar distribution covering the Arctic and the sub-Arctic regions of Europe, Asia, and North America.  Fairly common in the Southern oceans, the Arctic Tern, most of which pass offshore en-route to and also from their Antarctic wintering grounds.  Some, however, remain over the summer.

Being a reasonably small bird, recent studies have shown these amazing birds average annual round trips between 70,900 km – 90,000 km, dependent where the birds actually nest.  These staggering numbers are by far the longest migrations known in the animal kingdom, with the Arctic Tern flying from its Northern Arctic breeding grounds to the Antarctic and back again each year. 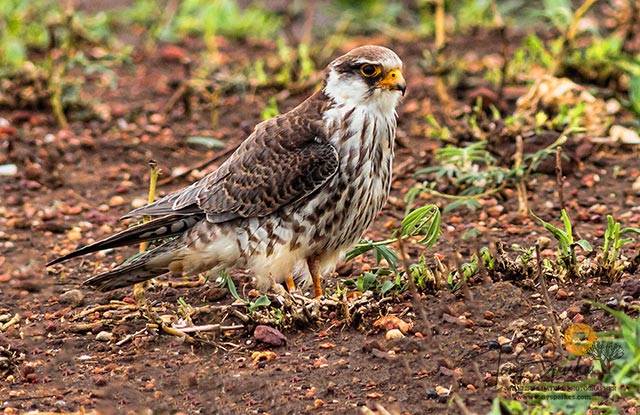 Two of the better recognised Afro Palearctic migrants in South Africa are from Eastern Europe/Asia; they are the Steppe Buzzard (Buteo buteo vulpinus) and the Steppe Eagle (Aquila nipalensis).  These medium-sized raptors/birds of prey fly all the way from their breeding grounds in Eastern Europe, Southern Russia and the central Asian ‘steppes’ and as far east a Mongolia.

Afro Palearctic migrants most recognised from Europe include the Barn Swallow (Hirundo rustica), the colourful European Bee-Eater (Merops apiaste) and the  European Roller (Coracias garrulus).  These Afro Palearctic migrants start to arrive in South Africa between August – November each year and start their departure March -April the following year.

Afro Palearctic Migrants – The Most Travelled

Probably the most travelled of the inland Southern Africa Afro Palearctic migrant birds is a small insectivorous raptor (eats insects) the Amur Falcon (Falco amurensis).  This small raptor breeds in Southeastern Siberia and Northern China before migrating in very large flocks across India and over the Arabian Sea to winter in South/Southern Africa; a round trip of over 22,000km!!

Boundaries do not apply to migrant birds, which arguably make them the most mobile of animals on the planet, many undertaking colossal journeys each year.

Migratory birds travel very long distances on their annual journeys, sometimes even tens of thousands of kilometres.  The survival of migratory birds depends on the availability of well-connected networks or chains of habitats along their migration routes, which are used by birds for refuelling.  The ‘Flyway Map’ (courtesy of Birdlife SA) shows such routes taken by migratory birds.

In 2012, mass trapping and capture of migrating Amur falcons by hunters in Nagaland (India) were reported in the media.  With a public outcry internationally a very successful campaign began to prevent their capture and slaughter.  These hunters who slaughtered 15,000 Amur falcons daily now protecting millions of these migratory birds has been an astounding success story.

With this Amur Falcon success in India, where all illegal trapping was halted through the intervention of the BirdLife partnership in 2013, it is our responsibility to conserve migratory birds at the end of their migration route here in South & Southern Africa and to lobby with international partners to protect the breeding, stop-over and wintering sites of such species.

Finally a  question one must ask in all of the last 3 posts on bird migration, why do birds migrate?  It is generally understood the reasons for migration are 2 fold. Birds migrate to move from areas of low or decreasing resources to areas of high or increasing resources. The two primary resources being sought by them are food and nesting locations. Bird migration is a fascinating and interesting subject which I urge you to research further whichever part of the world you may be in.

Tony Sparkes
Photographer & Guide at Tony Sparkes Wildlife & Photographic Safaris
Tony Sparkes is a professional wildlife & nature photographer in South Africa. Being a qualified field guide he also leads photo and wildlife safaris in South & Southern Africa.
Latest posts by Tony Sparkes (see all)
By Tony Sparkes|2019-09-04T20:14:38+02:00March 26th, 2019|Categories: Birds|Comments Off on Bird Migration (Part 3)
We use cookies on this site to optimise your online user experience. Some of the cookies we use are essential for the site to work. By continuing to use this site you accept our use of cookies. Learn more about Cookies I Agree
Go to Top